It's Never too late…

It’s never to late to get started in new media. As you look around this site you’ll see all kinds of mentions of groups getting together and learning from each other. One event is called Wednesdays @Starbucks. During that time we get together one day a week ask questions, show off stuff, get pointers, talk politics and bounce ideas off each other. This has been a valuable resource for me because it shows me that I still have plenty to learn and great people to learn from like Celina F. Acquaro.

We lost Celina to Cancer. She’s been coming to the group for a better part of a year and half, she was our Wednesday cheerleader, organizer, note taker, and sometimes glue. Every week she had questions, things to show off and once in a while she would bring in new members and special guests.
She always wanted to make sure I put the sign out. Sometime she would get frustrated with me because I’d forget to bring the sign so she made sure she had copies and one of my extra stands to display the image. She wanted everyone there know it’s meeting time at Starbucks.
Celina lost a battle with Cancer she didn’t even know she had. It was a surprise and shock to everyone who meets with us. We lost a great asset and champion of what we are doing. I admire Celina for many reasons, but the best one, she was ready to take on anything. At 62 she was ready to give new media a shot and that’s what she did.
She had her laptop loaded for bear with programs to help her make just about any kind of art you could imagine photography, video and even sewing. She was proud of what she could make with her sewing machine that made even the most complicated of video cameras look simple. She was working on a whole line of Midwest Media Now apparel. 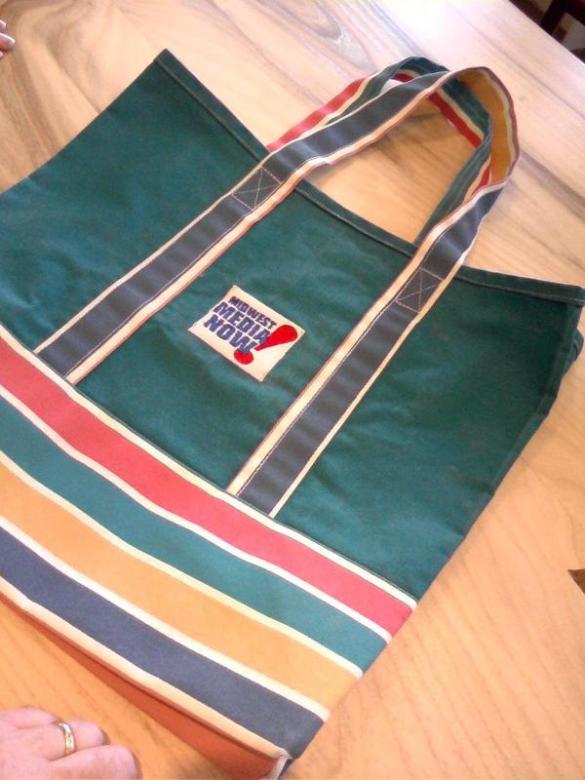 I’m not sure how many of them we would have sold but I know I would have bought one. She was very in to prototyping something. That’s what we are all about testing things out and trying new things with the creative tools we use and try Celina did!
Rain or shine Celina brought her laptop and various projects she was working on. Always loaded with questions we had answers and we enjoyed giving them.  She wasn’t afraid to speak her mind, and not waste her time visiting. But she wanted it to be a learning experience for everyone else too.
She helped me rethink our group and how to help people who have questions about making media with the tools they have.
The drive Celina had wouldn’t have changed even if she had know about her condition, it would have made her more determined to learn. Her last few times with group was spent on the internet connecting to us with uStream or Skype. Whatever tool she had she would make it work.
Now I know without a doubt it’s never too late.